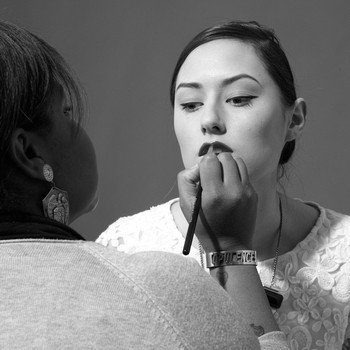 Dana is a makeup artist.

Her keen interest in all aspects of makeup began very early in her childhood, springing from studying the stylish album covers of the era and watching old school "Creature Features" on Saturday afternoons. While most of her elementary school peers were idolizing pop stars and sports figures, Dana was already becoming obsessed with makeup masters like Stan Winston, Rick Baker, and Dick Smith. When she was a teen, she answered a casting call from a theatrical supply shop seeking models for their costume catalog. After receiving that paycheck, Dana went back to that same store and spent all of her money on stage makeup.

While studying theatre performance in college, she also learned techniques in theatrical aging and period hairstyling, and began working in cosmetics retail as a makeup artist for Prescriptives. Dana spent a few years after college juggling part-time makeup jobs and theatrical gigs at venues in Washington DC and Chicago, while working for two fashion retail giants, Gucci and Betsey Johnson. She ultimately chose to focus all of her attention on a full-time career in makeup.

After a decade working in luxury boutiques, department stores, and spas as a makeup artist and skin care trainer, she missed the creative side of makeup and decided to pursue more advanced education. Dana was selected by The Powder Group as the 2011 recipient of The Kelly Gleason Scholarship For Makeup Arts, and completed the Production Makeup program at Cosmix School of Makeup Artistry in Fort Lauderdale, Florida. She graduated at the top of her class.

Dana's obsession with makeup has blossomed from a girlhood hobby into a full-time career. She is represented by T.H.E. Artist Agency of Washington DC and has been published in Cosmopolitan, XXL, Esquire, Washingtonian Mom, Women's Health, Town and Country, and The Baltimore Sun. In addition to her print work, she has groomed several Capitol Hill politicians for television interviews. Dana has also worked with professional athletes and world-renowned musical artists, including Prince. She still enjoys doing seasonal gigs at haunted houses and using her fx skills to bring creepy characters to life. When she is not working, she is actively volunteering in her community. She provides makeup and grooming during family portrait sessions for Flashes of Hope at Johns Hopkins Children's Hospital. Dana is also an outspoken breast health advocate who has traveled extensively as an Education Ambassador for Bright Pink and For The Breast Of Us.

She lives in Maryland and is available for travel worldwide.