On Moonshots, Mammograms, and Malarkey...

It is extremely rare that I get to wear my makeup artist apron on the same day as my metaphorical cancer crusader hat, but a few weeks ago I was alone in the room with Vice President Joe Biden. 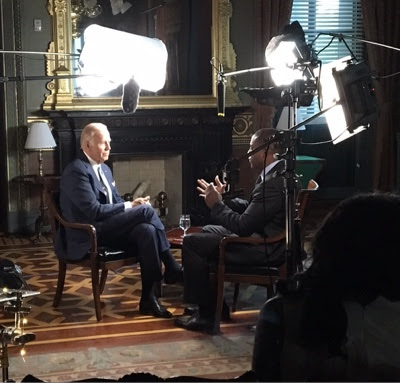 The Contenders is a political docu-series that explains the history behind some of the USA's most controversial and charismatic presidential campaigns. One day I met with our DC-based crew at the White House gates, and we set up for the interview at the VP's office next door, in the Old Executive Office Building. Even while the security team was searching my makeup kit, I was still conflicted about what, if anything, to say to Mr Biden. I don't bring up my personal life while working with political clients. Usually, if there is any talk, I keep the conversation fluffy and superficial, sticking to light subjects like our favorite DC restaurants and the weather. If I am lucky, I get to channel my inner Jemele Hill and chitchat about that politician's favorite local or regional athletic team record, like an ESPN anchor with a powder puff.

The VP had just wrapped up a Cancer Moonshot press appearance earlier that day, so I knew his passion for the subject would be fresh in his mind at that moment. When our producer pulled me aside to tell me he was on his way and that we would have a few moments alone to prep for the camera, my heart and thoughts began to race... I can not believe these people trusted me with the Vice President. Don't they know me? Is this some kind of test?? Is my breath okay? Finally, Joe Biden walked in and warmly welcomed me to his office. As soon as he sat in the chair so I could begin grooming him for the cameras, I went for it.

"You know, some of these groups are still out here pushing the harmful narrative that "mammograms save lives" even though some of the deadliest cancers might not show up on mammograms? That's ludicrous... No, wait... it's MALARKEY! And the American Medical Association recommendation to start mammograms at age 50 is kind of late, don't you think? Personally, I believe that, in certain populations, it's almost a form of genocide. Women of all ethnic backgrounds are being affected by breast cancer at ages younger than 50, but indigenous Native American and Black women are disproportionately diagnosed at younger ages. I would like to see that AMA age recommendation changed, but that's just my opinion... Would you like some lip balm, sir?" Time was running out, but while I was smoothing pomade into his hair, I just kept on talking.

"Pretty soon you're going to be retired from this job, and you might end up getting super bored, like my dad did when he first retired. So, if you're looking for something fun to do and you want to keep making a difference in the world, you're welcome to come with me on a ride-along. I go to college campuses, office buildings, church basements, community centers, or anywhere else there is a large gathering of women willing to listen to me talk about breast and ovarian cancer risk reduction, early detection, and genetic counseling. How cool would it be if I introduced my special guest, Mister Moonshot Former Vice President Joe Biden, you shout out some inspiration to the crowd, and then just dropped the mic on 'em? If you don't have anything pink to wear, don't worry... I'm very crafty and I will totally bedazzle some matching hoodies for us. Sir, I think you look pretty fabulous. Let's get you in front of the camera."

The Vice President asked me what motivates me to do this stuff, so I quickly told him while I straightened his lapel. He gave me a "proud dad" hug, some strong words of encouragement, and then said, "WOW. You're the real deal... You turned out all right, kid!"

(VP JB, if you get the chance to read this, my offer is infinite and still stands. The ride-along, the bedazzled hoodies, everything... I meant every word. Breast cancer awareness month may have just ended, but I do this stuff all year long. You and The Mrs Dr JB are welcome to call, text, email, or come rage out with me at any event of your choice.)

Working on The Contenders was a dream gig for me. Documentary work is always my favorite because I am constantly learning fascinating facts while on the set. My mom was a political history geek and a DC native, so when I got called for this job, I wasn't going to let untimely medical procedures hinder me from accepting it. The director and producer were both women, and when I made them aware of my situation they were very understanding of my physical limitations. Thankfully they also understood when I totally crossed the line and threw all of my well-taught "setiquette" out the window to stand on my personal soapbox at work! I apologize to all my on-set mentors and makeup teachers who may have cringed while reading this, but they all know that when I'm not at work, I am active with a both a non-profit women's health education group and an organization that works directly with cancer patients. Therefore, I could not be in the room with THIS GUY on this particular day and not speak up.

While filming The Contenders, we heard hundreds of hours of interviews about election history from former candidates for the United States presidency and the people who helped support them. Some of these candidates did not win, but all of their campaigns changed politics and press coverage in ways that still resonate sharply today.

Watch The Contenders on PBS, On Demand, online at Ozy Media, and don't forget to vote!